A trip to Wellington

Posted on December 2, 2014 by jaspersdoggyworld

Greetings loyal readers and fellow maremmas. One of the many reasons why mummy has not been helping Us with our blog is because she took Bashful down to Wellington.  He was supposed to be going with daddy, but mummy didn’t trust those two together, so she decided to go down to join them.  As daddy was already in Wellington, she travelled down on an Intercity bus.  Once, down there mummy and Bashful took in the sights.

A statue of Mahatma Gandhi, outside the Wellington Railway Station

An iconic Wellington building called the Beehive. It is part of our Parliament building complex.

A statue of John Plimmer, known as the Father of Wellington and his dog called Fritz

In 2015, the Cricket World Cup will be held in New Zealand. 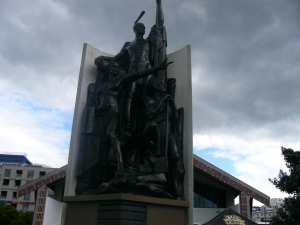 William Trethewey’s Kupe Group (1999) was unveiled at this spot in March 2000, but has a long history before this date.
The original work titled The Coming of the Māori (1939) greeted visitors at the Centennial Exhibition 1939-40. It stood at the end of a pool, and was constructed of painted plaster.
After the Exhibition, the piece was moved to the Wellington Railway Station where it suffered decades of vandalism. In 1986, it was moved to the Wellington Showgrounds and then eventually to Te Papa. The original was cast in bronze in 1999.
The piece consists of Kupe Raiatea, the great Maori explorer and discoverer of Wellington harbour, his wife Te Aparangi and tohunga Pekahourangi.

You have to look carefully, Bashful appears in most of these photos.  Mummy thinks he enjoyed himself.  It was a pity that the weather was not better.  If, it had been they would have gone to the beach at Oriental Bay, Wellington’s inner city beach.

Love Nellie and Jasper, the two bestest maremmas in all the land, who had to remain at home, under the tender loving care of Aunty.

This entry was posted in Uncategorized and tagged bashful, Maremma, wellington. Bookmark the permalink.

14 Responses to A trip to Wellington

From a pool to a garden

Staying connected through memories and food

Breaking In The Habit
Country Grrrl